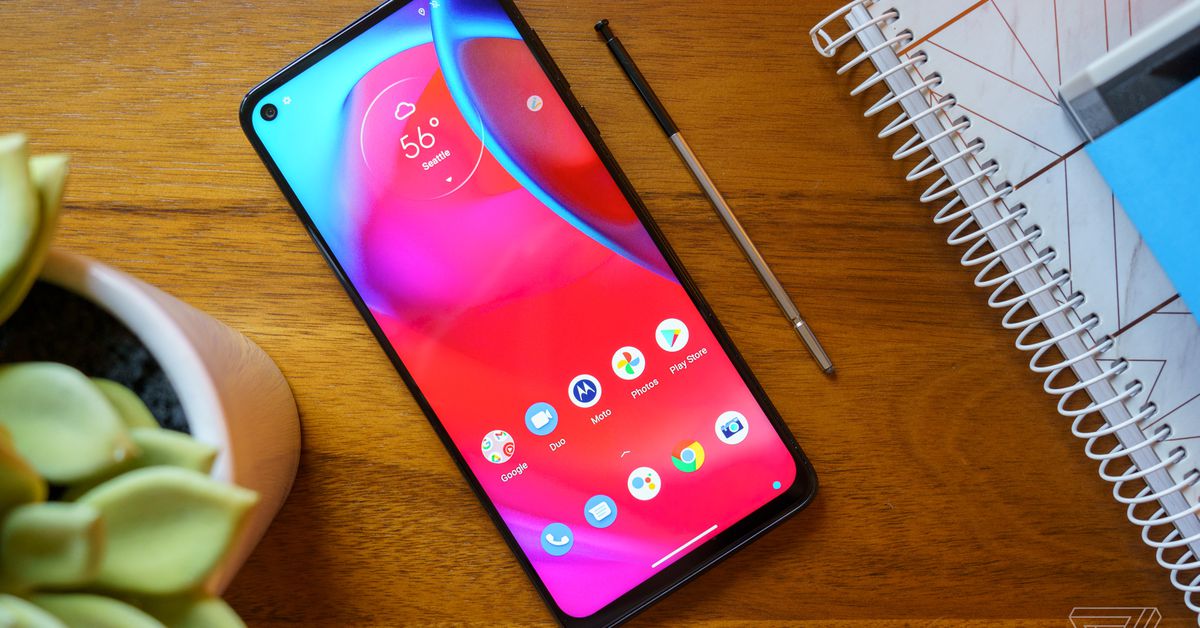 The Motorola Moto G Stylus 5G, as you may have pieced together, is a phone with a built-in stylus and 5G. It’s a slightly upgraded version of the 4G-only, 2021-edition Moto G Stylus (I’m sorry, that’s really how these phones are named).

The Stylus 5G includes a few more hardware upgrades in addition to 5G connectivity, including a bigger battery, more storage and RAM (256GB and 6GB on the version I tested, respectively), and a newer Snapdragon 480 processor. There’s a new stylus-friendly GIF creator mode, which is fun. Fun is good! But it more or less feels like the same phone: the rear camera array is identical with the exception of a different macro sensor, its 6.8-inch screen is the same, and overall dimensions are similar.

This puts the G Stylus 5G in a kind of awkward spot. At $399, it sits between the $279 G Stylus and the $1,000 Galaxy Note 20 (the next step up if you want a stylus with your phone), but it doesn’t go far enough to clearly offer more than the budget-friendlier version. Performance and battery life are a bit better, but these aren’t really weak spots for the 4G version.

Having 5G is nice, too, but the value is diminished when you consider that the G Stylus 5G is only guaranteed two years of security updates. That’s about when 5G in the US will start getting good, so most of us can get away with a 4G device for the next couple of years.

It all adds up to a good phone without a compelling case to recommend it.

The G Stylus 5G is a big phone — big with a capital B. Its 6.8-inch display is about as large as they come, at least until all of our phones start folding and expanding into weird little Transformer-style tablets. It’s a 1080p LCD panel that’s just fine — lacking the nice contrast of OLEDs but still usable in bright daylight conditions.

Battery life is very good, thanks to a large 5,000mAh cell. Using it on Wi-Fi I’ve gotten four hours of screen-on time out of it and it’s only down to 36 percent. You could certainly get two days’ worth of use out of it — including relatively heavy use on cellular data — and even a full day of very demanding use seems reasonable.

For $400, you really should get more than a couple of years of support for your device

Performance is good, too; jumping between apps is quick and smooth, and heavier tasks like zooming in and out of Google Maps shows only a bit of stuttering. There’s minimal but noticeable shutter lag in the camera app, which feels like a problem this phone shouldn’t have, but not enough to ruin anyone’s day.

A couple of side notes on the Stylus 5G’s 5G connectivity: at launch it will work on Verizon and T-Mobile’s 5G networks but will operate as 4G-only on AT&T. Motorola says AT&T 5G support will be available “in the coming months.” It’s not compatible with any of the networks’ mmWave 5G (the super fast, hard-to-find variety), but that’s not a big loss. More importantly, it will work with the C-band 5G frequencies Verizon and AT&T will start using at the end of the year.

The Stylus 5G’s stylus features are basic but adequate. The capacitive stylus is spring-loaded into the phone’s lower right corner and automatically brings up a quick menu of options when you remove it. If you’re on the lock screen, you can jot down a note without having to unlock the device, which is handy. You won’t find productivity features or neat tricks like wireless control a la the Note series, but rather some handy shortcuts to grab a GIF or doodle on a screenshot. They’re useful and fair for the price.

Much like the 4G version, the Stylus 5G takes good photos in abundant light with a surprising level of detail, thanks to the way it processes 48-megapixel images into 12-megapixel files. The ultrawide camera is nice to have, though its images can be a little noisier in challenging lighting conditions, and the macro camera is still underwhelming, despite the modest resolution boost.

The main camera is prone to some drastic color shifts with even slightly different compositions of the same scene and subject — in one shot my orange cat is orange, and in the next one taken at a slightly different position, he suddenly looks blue. This happens more frequently in mixed lighting conditions, which many cameras will struggle with, but it popped up just often enough in my testing to annoy me.

The 4G-only G Stylus is a good deal for $279, and there’s nothing really wrong with the $399 G Stylus 5G, but it’s harder to justify its higher cost. With only a couple of years of security updates guaranteed, this phone will only see the beginning of truly good 5G in the US. It’s a nice step-up option if you’re inclined toward a stylus phone and the Note isn’t in your budget, but for most people, I’d recommend either sticking with the 4G-only model for a couple of years or looking into a 5G phone with a little more longevity.

If you’re more interested in the big screen and battery than the stylus, you could save quite a bit and go with the Moto G Power (2021). Its processor isn’t as good and you miss out on the ultrawide camera, but if you want to cover the basics for a couple of years, it will do.

On the other hand, if you can afford to spend a little more and you do want to get more than a few years out of your phone, the Samsung Galaxy A52 5G is a great pick. It has a big, lovely screen, 5G, and comes with a generous support policy. Stylus enthusiasts on a budget have a good option in the Moto G Stylus 5G, but most others could do better elsewhere.

Photography by Allison Johnson / The Verge