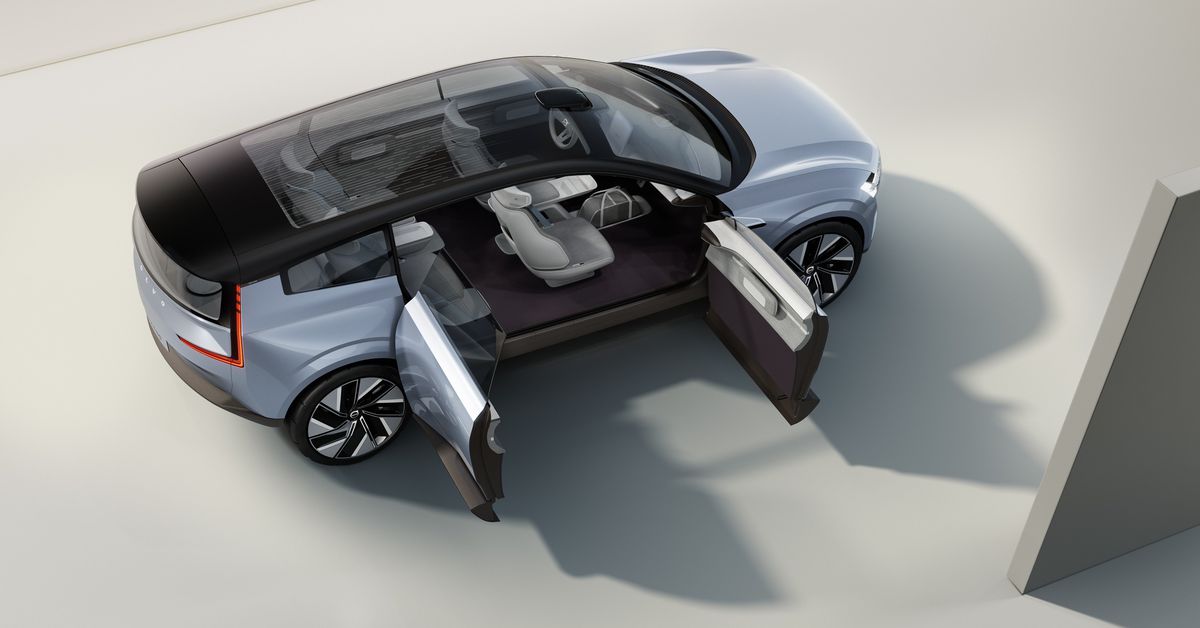 Volvo unveiled a new concept car that forecasts the Swedish automaker’s all-electric future. The vehicle was revealed during a “Tech Day” event held Wednesday during which Volvo laid out an extensive roadmap to becoming an EV-only carmaker by 2030.

The vehicle, called “Concept Recharge,” features suicide doors that open up to a roomy interior, where the lack of an internal combustion engine means more space for the driver and passengers. The sleek exterior design and minimalist interior certainly evoke Tesla but also are reminiscent of other EVs on the market, such as the Ford Mustang Mach-E.

But the concept won’t necessarily appear in this form as a production vehicle. Henrik Green, chief technology officer at Volvo, said it was likely that a “version” of the Concept Recharge could become reality within the next three years — excluding the dramatic suicide doors, unfortunately.

“All of the proportions are realistic for us in the future,” Green told The Verge. “Having what we call the suicide doors without the B-post might be the thing that doesn’t appear in the real car.”

Volvo said it plans to sell 600,000 by the middle of the decade and will build a battery manufacturing facility in Europe by 2026. The company has said it is working with Swedish partner Northvolt on a new generation of batteries with higher energy density and designed to be integrated as a structural element of the vehicle. The new batteries, due after 2025, will enable a longer driving range between charges — up to 625 miles (1,006 km) — and much faster charging times.

The company reiterated its plans to equip many of its cars with lidar laser sensors from Luminar, which will help improve safety and set the stage for more autonomous driving features in the future. Last week, Volvo announced that lidar will come as standard in its passenger vehicles, though the hands-free highway driving feature that the lidar will enable will cost extra.

Volvo is also bringing software development in-house, which Green described as a way to help speed up the deployment of new updates to the company’s fleet or correct bugs in the system. The new operating system, which will be called VolvoCars.OS, will power the company’s next generation of electric vehicles and will enable unsupervised driving on highways. (Currently, all advanced driver assist systems require drivers to pay attention to the road.)

The new OS will act as an “umbrella system” for all of the underlying systems that operate within the vehicle, including Android Automotive OS, Blackberry’s QNX, Linux, and AUTOSAR — which Green said he “wouldn’t mind getting rid of.” Green said he also “wouldn’t mind” making Volvo’s entire software platform open source if it helps improve the quality of the automaker’s features.

Volvo said its new architecture will feature a core computer comprised of two systems-on-a-chip provided by Nvidia. Initially, one will focus on core driving functions, while the other on semi-autonomous features and more advanced functions. In the future, Volvo hopes to synthesize the two computers into one system for more efficient processing.

Next year, Volvo plans on unveiling its flagship electric vehicle, the new XC90 SUV. The company’s first EV, the XC40 Recharge, went on sale this year, and the follow-up, the C40 Recharge, will be available later this year.

Volvo is the latest automaker to lay out a grand vision for how it plans on tackling the twin challenges of electrification and autonomy. Previously, Tesla and Volkswagen have produced similar events. Volvo, which has nurtured a reputation for safety over the years, said it’s realizing that technology could be a bigger driver of sales in the future than anything related to airbags or crash resistance.

“People are actually buying a car because it has Android infotainment system, and it works seamlessly with your phone or ecosystem,” Green said. “And that could be more of a driving factor than a new nameplate.”