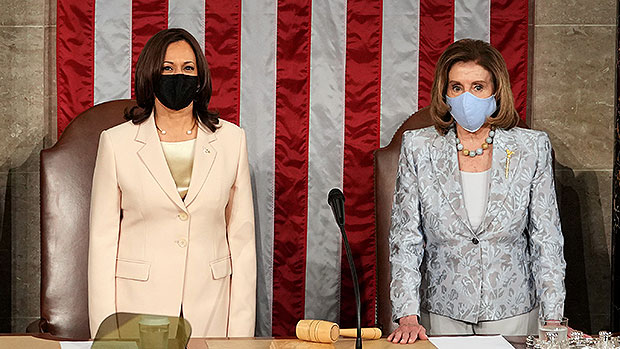 Tonight, Kamala Harris and Nancy Pelosi make history as the first two women to sit behind a president during a congressional speech. They celebrated with an elbow bump.

“Madam Speaker. Madame Vice President. No president has ever said those words from this podium, and it’s about time,” President Joe Biden began his first speech to Congress, to cheers. Before the historic April 28 event began, Vice President Kamala Harris and House Speaker Nancy Pelosi grasped hands and elbow bumped before settling down at the dais behind the president. It’s the first time that two women have ever taken those seats at the same time.

VP Harris and Speaker Pelosi share an elbow bump ahead of Pres. Biden’s first congressional address. This will be the first time two women stand behind the president as he addresses Congress pic.twitter.com/tdBanSlUnK

This is Biden’s speech to Congress, but all eyes will be on Harris and Pelosi. Harris, the first female vice president in United States history, shared a sweet moment with the only female Speaker of the House in United States history. Pelosi also gave Harris a standing ovation when she was recognized as “Madame Vice President.” Viewers at home raved over the triumphant pairing in pastel suits as they watched the moment unfold.

“Kamala and Nancy running the world helps me sleep at night. Let’s hear it for competent, ambitious Bay Area women!” one Twitter user wrote, praising the California-based politicians. “Young girls everywhere are learning if Kamala and Nancy can do what they dream, they can too!” another person tweeted.

Biden’s speech was not a State of the Union (those begin during the president’s second year in office), but an address to a joint session of Congress about where he’s at so far in his presidency. The turnout was smaller than a normal SOTU due to the pandemic — the House is in recess, many senators are still working from home, and no guests were allowed.

Though Pelosi and Harris were masked up, their body language during Biden’s address spoke volumes, as did their frequent applause breaks. The vice president and the speaker’s reactions often go viral when they disagree with the president. Who could forget Pelosi sarcastically clapping for Donald Trump in 2019? With Biden, it was nothing but positive.