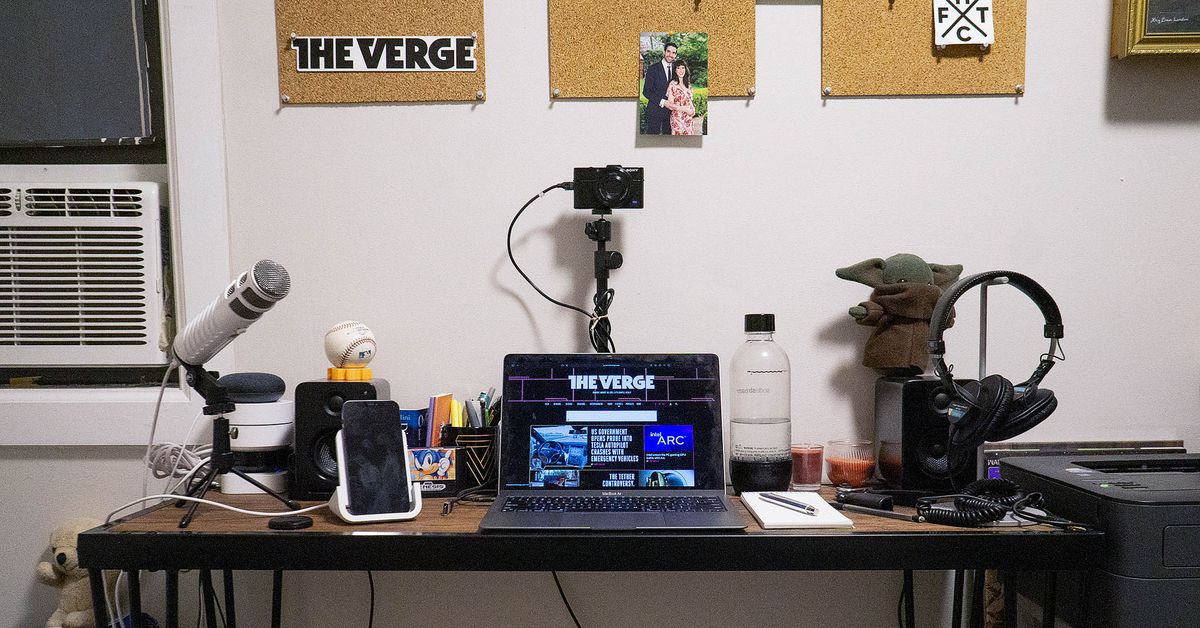 If you’re a frequent reader of The Verge, I’m sure the name Chaim Gartenberg is known to you. He’s been reporting and commenting here for years on everything from the latest AMD Ryzen processors to the new trailer of The Witcher, and has become a familiar sight on videos as well.

Chaim recently moved to a new space, which means he got a chance to set up a new space for working at home. We asked him to talk about it.

Tell me a little about yourself. What is your background, and what do you do at The Verge?

I’ve been at The Verge for just over nine years — I started as an intern in August 2012, and I’ve worked with a lot of pieces of the site over years, including being a reporter, working with our Circuit Breaker gadget blog, and, of course, writing tech news.

Right now, I’m one of our news editors, which means a fair amount of news writing, but I also do a lot of tech reporting, in addition to helping out with our culture and games coverage. Mostly, though, I just like getting to write about the latest tech things and geeking out over obscure specification details (looking at you, incomprehensible USB-C standards!).

Tell us a bit about your workspace. How did you decide where and how to set it up?

We just moved in the beginning of June, and one of the biggest things on the list for when we were apartment hunting was space so that both my wife and I could have our own offices. Mine is technically also our guest bedroom — we have plans to put in a trundle bed / couch-type thing just behind where I usually sit, but it doubles as a pretty spacious office.

The one downside is that there’s not much natural light; the window just faces an internal wall, so I rely a lot on lamps.

Tell me a little about the desk itself.

The desk is actually a console table that my wife and I got for free when someone in her old building was giving it away. We ended up getting a nicer table for our entryway, though, and between the height and the width of the table, I thought it would be a pretty perfect desk for me (given that I couldn’t actually fit my knees under my old desk).

It’s not the deepest desk, so I do have to think a little bit about what I put on there, but it fits my laptop, a notebook, and a bottle of seltzer or a mug of tea, which is good enough for me. The smaller size also helps keep in check my usual tendency to just let all my clutter run rampant.

How about your chair?

I don’t actually have a lot of information on the desk chair. It was a gift from my wife, who snagged it when her company closed down their office when the pandemic started and let folks take home any furniture they wanted. (The wood and fabric filing cabinet that my printer is mounted on also came from there.) Given that I had been using a metal folding chair until then, it was a nice upgrade.

Okay, let’s go for the gold: could you tell us about the tech that you’re using there?

Absolutely! The star of the show is my main work laptop: an M1 MacBook Air that The Verge issued me, and hands-down the best laptop I’ve ever used. Mine is a 16GB RAM / 512GB storage model, which I’ve customized with a Verge sticker (which also helps avoid confusing it with other laptops).

To the left is a Logitech Powered wireless charger. It’s not the newest charger around, and is basically only useful for charging an iPhone (it tops out at 7.5W), but it was cheap (since it’s the older model, it cost around $20) and it keeps my iPhone 12 perfectly angled to unlock with Face ID so I can check my notifications at my desk.

The headphone stand is a fancy aluminum model from Master & Dynamic that just plain looks nice. Hanging on it is a pair of Sony MDR-7506 wired headphones, which I keep around for podcasting and any important video calls where I don’t want to risk using a pair of wireless headphones. I keep a pair of Sony WH-1000XM4 noise-canceling headphones on top of the metal cabinet to the left of my desk, too, since I live in NYC and, well, the city gets pretty loud sometimes.

While I work almost exclusively off my laptop, I do keep a fancy camera setup for times that I need to look more professional on a Zoom call. The camera seen here on that tripod is a Sony RX 100 II, and it’s actually not the one I use for calls. That is my Sony a6000, but I needed it to actually shoot the pictures for this article. Similarly, I keep a Rode Podcaster microphone around for the occasional podcast appearance or when I’m interviewing people for Verge articles.

The speakers are a pair of since-discontinued Nocs NS2 Air Monitors from 2013 that I bought in college when they were extra cheap (the company had just released a newer model with Bluetooth). They still sound great, but they’ve never been updated to AirPlay 2, so using them as wireless speakers is a little flaky. Usually I just plug them into my laptop instead.

A dynamic, end-address USB microphone that combines broadcast-quality audio with the simplicity of USB connectivity.

To the left of the speakers is a stack of smart home gadgets: a Google Home Mini (for controlling the lights and air conditioning in the office), a Google Wifi puck (one of three scattered around the apartment), an Aqara hub for our light switches, and a Philips Hue hub for our smart bulbs. Please ignore the rat’s nest of cables peeking out behind them.

On top of the metal filing cabinet is what I like to think of as my charging station: it’s where I keep any gadgets or gizmos that need occasional charging, like my custom-hacked iPod (which has 256GB of internal storage and a quadruple-sized battery), my Kindle Oasis, and my Sony WH-1000XM4 headphones (when they need a top up.)

And then on the right of my desk is a Brother HL-L2360DW laser printer that I bought in 2017. It’s a very basic printer: it only prints in black and white and doesn’t feature much in the way of bells or whistles. It is wireless, though, and does support duplex printing, both of which are more useful to me than color photos. I don’t actually have to print out that many things these days, but it’s extremely helpful for the occasional concert tickets, shipping labels, and other assorted random documents.

Anything special about the baseball?

I got the baseball from a Yankees game years ago that my dad took me and my brothers to, and it sits on top of a 3D-printed gear that one of my college friends made for me. Mostly, though, it’s just another thing to occasionally fidget around with during the day, Captain Sisko-style.

I envy you your Baby Yoda. (Although I have a Jawa that’s nearly as cute.)

Thank you! I got it from an Etsy seller when the Mandalorian had first kicked off Baby Yoda fever across the internet — something that actually turned into an interesting story for The Verge about how Disney was issuing take-down notices for the most popular unlicensed toys featuring the character. He used to live on my desk at the office, but I rescued him from the empty office when I started working more remote last year.

It’s very much a work in progress, but I had accumulated a lot of random bits of art, stickers, and patches over the year that were living in a drawer. I’m still planning to add a lot of stuff to that setup — especially some pictures — but it’s a big step up from the blank slate of wall that used to be there.

And there are a few old-fashioned touches: the dictionary, for example, and the Sega Genesis cartridge.

The Genesis cartridge has lived on various desks of mine since high school; Sonic is one of the first games I can ever remember playing, and while I don’t actually have a Sega Genesis anymore, it’s a nice reminder to have. The dictionary is more aspirational: I like the idea of thumbing through an actual paper book to look up things while I’m writing, although I usually tend to just use my computer.

This is obviously a work in progress. Do you have any other plans to add decorations, furniture, or other stuff to the space?

Absolutely. I’m currently looking into replacing the desk with a larger and adjustable standing desk, and potentially getting a monitor / keyboard / mouse setup so I can dock my laptop and use a more traditional desktop setup with a bigger screen (that’s probably also better for my posture).