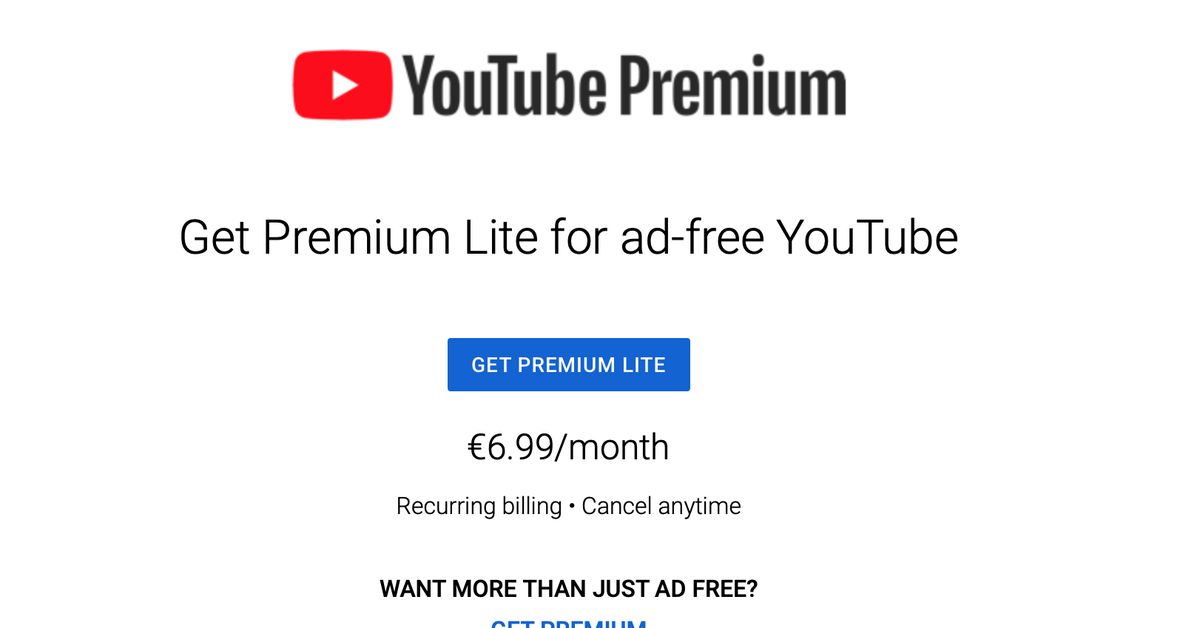 Google is piloting a more affordable premium subscription tier for YouTube that offers ad-free viewing without YouTube Premium’s other features like offline downloads or background playback. The new “Premium Lite” plan was spotted by a user on ResetEra, and YouTube subsequently confirmed the test offering in a statement given to The Verge. Premium Lite is currently being tested in Belgium, Denmark, Finland, Luxembourg, the Netherlands, Norway, and Sweden.

“In Nordics and Benelux (except for Iceland), we’re testing a new offering to give users even more choice: Premium Lite costs €6.99/month (or local equivalent per month) and it includes ad-free videos on YouTube,” a YouTube spokesperson said in a statement. In comparison, YouTube’s existing Premium plan costs around €11.99 a month in Europe.

Premium Lite includes ad-free viewing across YouTube’s main app on web, iOS, Android, smart TVs, and games consoles, as well as in the YouTube Kids app. However, it doesn’t include any YouTube Music benefits like ad-free listening, and it doesn’t include Premium’s other features like background playback (for when you want to switch to another app while continuing to listen to audio from a YouTube video), or offline downloads.

Speaking as someone who hates the amount of ads on YouTube, but isn’t too interested in Premium’s other features like offline downloads, Premium Lite sounds like a tempting proposition. But at its current pricing, it costs around 60 percent of the price of a regular Premium subscription, while only offering around a quarter of its benefits. YouTube says that the current subscription is in an experimental phase, however, and that it’s considering rolling out more plans based on audience feedback.